Happy Monday Novas! I hope everyone is being safe if you are affected by Hurricane Irma. I may or may not have power when this post goes live but I’ve tried to preset some posts to go out this week and this is one of them. Saturday night I was playing the Trading Card Game Yugioh Legacy of the Duelist on PS4. I’ve completed the main story and moved on to Yugioh GX which has to deal with fusions and stuff. When I played Yugioh physically, I played the normal version so I had little knowledge on fusions. Because of my ignirance, I decided to use the story mode decks for most of my battles; Big Mistake!!!! The story line decks are fine but some of the character’s setups are just plain annoying to play with. I know, I know that the premise is to teach you to adapt to your situation and such, but I like action! Some decks are passive like this one deck that was 98% trap and spell cards!!!!! I mean I won the duel after I was finally able to steal monster’s from my opponent (thank you monster reborn lol) but what if I couldn’t kill my opponent’s monsters??? I would have been a sitting duck lol.

So that experience prompted this discussion post. Do you use the story mode decks in TCG’s or do you make your own custom decks?

In the main story line, I made custom decks because I was familiar. My custom deck pretty much tore through any opponent that I was up against. It was pretty funny because playing online with my friends I was destrying as well. I highly recommend the Amazoness Deck build rofl. This deck can play against any normal deck pretty well, fusion decks will be your downfall but you can still put up a great fight. Let’s go through some of my favorite cards in this custom deck.

Amazoness Tiger – This card is targeted first out of all Amazoness monsters on the field. This card also gets a buff of 400 ATK (attack) points per each Amazoness on the field! Can you see how this tiger can be devastating for an opponent? It starts with 1100 ATK and 1500 DEF (Defense).

Amazoness Scouts – The scouts have very low ATK and DEF points. So why are they useful? That’s because some cards can have special effects. During either player’s turn: You can Tribute this card; this turn, face-up “Amazoness” monsters you currently control cannot be targeted by monster effects, and cannot be destroyed by card effects. This card is amazing!!! You can block and effect for your tribe, sooo bye bye  Mirror Force! I always have at least 2 scouts in my deck. 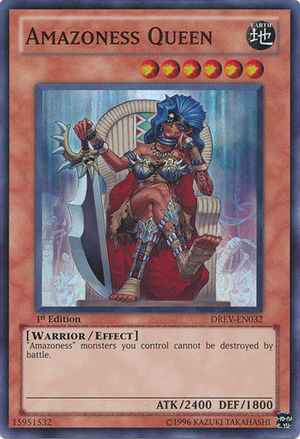 Amazoness Queen– With the Queen, any Amazoness monsters that you control cannot be destroyed by battle. You can have a full lineup firing away at your opponent until they’re pretty much frced to pull out like a black hole card to destroy ALL monsters on the field.

Some of my favorite Amazoness trap and spell cards are:

Queen’s Pawn– This trap card allows you to summon a level -4 amazoness monster when your amazoness in play destroys an opponent’s monster.

As you can see, the Amazoness deck build provides a lot of versatility and can pack a punch if played correctly. The downside of this deck is that while you can gain ATK power quite quickly, the levels cap out quickly and typically before 3000 ATK. That’s why its crucial that you do not use this deck against fusion decks that can have average monsters of 3000 ATK or higher. If you attack quickly and with strategy, you can even defeat fusion decks but it’s going to be difficult. That’s why I add in a few high level monsters that can pack a punch!

Have a fantastic day!