Happy Saturday Novas! It is finally Sunny back here in Orlando so I’m excited for the weekend! Tonight some friends and I are heading to this gamer bar called “Player 1.” It’s going to be awesome and I can’t wait to play some pinball (I really miss playing pinball in arcades lol). Today’s prediction post will be shorter then normal as I am less than 100 pages from finally finishing the book Dark Blood! Review on that will be posted maybe next week.

Money In The Bank is a specialty Pay Per View event that has a Money In The Bank Ladder Match. This match pits about 6 Superstars against each other with a breifcase suspended above the ring. The goal is to beat your opponents by ascending a ladder and ripping down the Money In The Bank briefcase. Why would you want the briefcase you may say? Because it contains a contract that guarantees you a shot at the World Championship Title… AT ANY TIME! That’s right, you can get a shot at any time.. even after an opponent has been beaten to a pulp… CHA CHINGGGGGG Cash in that contract and become champion! My favorite Money in the Bank Cash in is of course when Seth Rollins cashed in at Wrestlemania on Brock Lesner! All Hail the CHAMP!!!

Ok let’s get into the preview and predictions.

The WWE Championship match will be a re-match between champion Jinder Mahal and past champion Randy Orton. I’m expecting this match to be pretty good but there’s no way Orton is getting the title back. Maybe a DQ will come in to play which will still leave Mahal wtth the title. My prediction: All Hail THE MAHARAJAH!!!!! Jinder Mahal retains!

This match is a little weird to me. The Champion Naomi will be taking on the ravishing Russian,… Lana???? Yup, Lana (without her husband Rusev) will be participating in a title match. I really don’t know why lol. Hopefully the match will be good, but I don’t want Lana to win. My Prediction: Naomi retains! 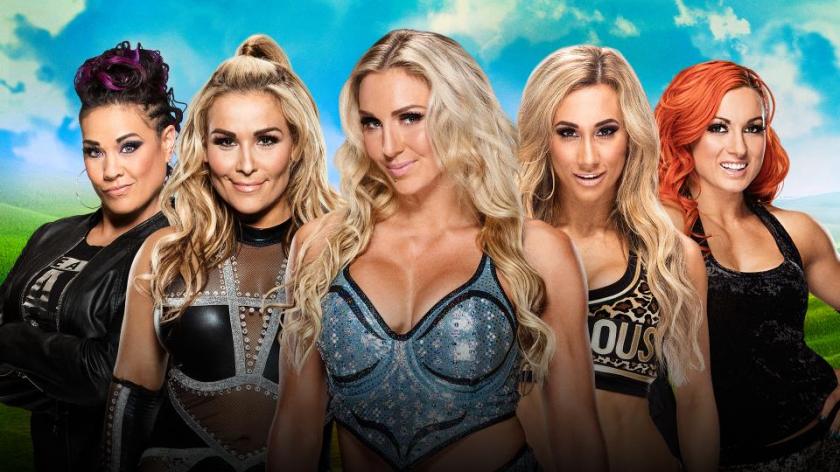 So the women will, for the first time that I can remember, have a Money In the Bank ladder match for the Smackdown Women’s Title. The participants are Becky Lynch, Charlotte Flair, Natayla, Carmella and Tamina. This is awesome! I feel as though the winner has been foreshadowed a few times. Let’s see if I’m correct. My Prediction: Carmella wins the contract.

The main event will most likely be the men’s Money in the Bank match (or the wwe championship match). The participants are US Champion Kevin Owens, AJ Styles, Baron Corbin, Sami Zane, Nakamura and Dolph Ziggler. this match is filled with potential. We all want Nakamura to win but we know this is a long shot. My prediction: Baron Corbin will win the contract.

These are my predictions for the Money In The Bank event tomorrow. I’m pretty excited about it and with my new schedule I get off in plenty of time to watch. what are your predictions? Do you agree with my choices? Let’s Talk WWE!