Happy Monday my brilliantly, shining Novas! As you know my brief hiatus has been due to the events leading up to and including Wrestlemania 33 here in my home of Orlando, Florida! Today’s post is going to be a short recap of the events that happened last night, so let’s buckle up for the Ultimate Thrill Ride and Results!

Pre-show– The Pre Show started at 5pm Eastern and went over a brief recap of the matches to look forward to in the main show. I always love watching the Pre Shows because I like gauging everyone’s predictions on what they think will happen. With the analysts table and social media questions involving Paul Heyman, we were also able to watch 2 quality matches that could have darn well been on the main show. The first was the Cruiserweight Championship match between “King of the Cruiserweights” Neville versus the every charismatic, greatest man alive Austin Aries. 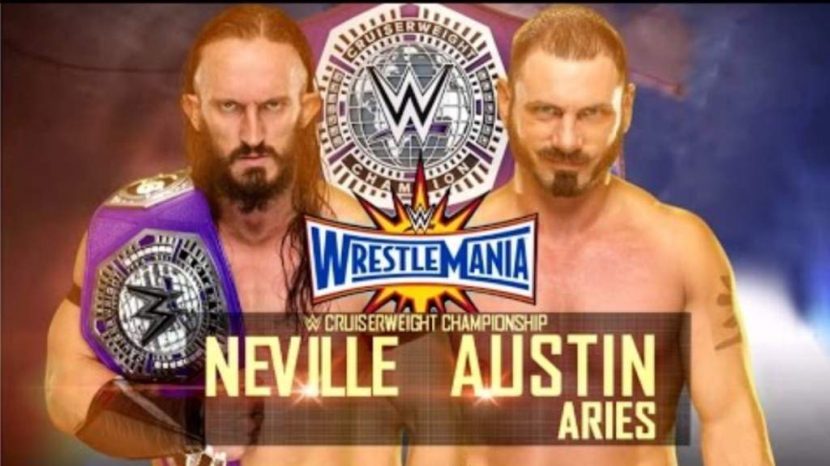 The build up around this match was pretty good as Aries was calling all of the Cruiserweight matches… that is up until Neville commented that “NO ONE” could hold a candle to him. Enter in Austin Aries. He traded his microphone for the wrestling speedos and challenged Neville. This match was everything we wanted, power moves, acrobatics and banter between the 2 Super Stars. Al up until Neville raked Aries’ eyes and obtain the pinfall. I wanted Aries to win but this was an awesome match and further showed his heel side to the WWE Universe. Final Result: Neville by pinfall

The last pre show match was the IC title between Dean Ambrose and Baron Corbin. Corbin has been wanting a big match for a while now and since the WWE Championship was taken from him by Ambrose eliminating him, the story-line  between these 2 SuperStars was  born. Corbin continued to ambush and troll Ambrose until it culminated with Dean accepting Corbin’s challenge for the IC title at Wrestlemania. The match was really good (aside from a few botches) and could have easily ascended to the main show if not due to a time restrain. Final Result: Dean Ambrose retains!

There was 1 more pre show match that happened second and it was the Andre the Giant Battle Royale. If you notice, most of the battle royale entrants were Smackdown Live tag teams because there was no title match for them put on the schedule. As expected the tag teams would work together to try and eliminate as many opponents as possible. If you’ve been paying attention to Twitter, you would have seen for the past week Gronkowski (NE Patriots) was training with Mojo Rawley and now we know why. Gronk took on Jinder Mahal and Mojo winds up winning the battle royale! Final Result: He doesn’t Get Hype, He Stays hype! Mojo Rawley for the win!

Now on to the main show Wrestlemania 33 which was hosted by the every entertaining New Day! This will be a quick synopsis of each match and the results!

Aj Styles vs Shane Mcmahon – Honestly, I was annoyed when this match was made for Wrestlemania. I feel as if people are trying too hard to re-create the magic of the Attitude Era with Stone Cold vs Vince McMahon. In this instance the dynamic doesn’t really work with Shane because the WWE Universe LOVES him! I thought a better match for AJ could have been created but this is what we were presented. I am pleased to say that the match was very entertainging and a great way to kick of the show! Shane showed off aore wrestling side and AJ Styles performed incredibly as always. The match had everything one could expect: High Flying Tricks, Risky Moves and a litte Banter. Final Result: AJ Styles wins via pinfall!

KO Vs Jericho- We all saw this match brewing in the distance of Kevin Owens and Chris Jericho’s “Friendship” facade. Finally the 2 erupted on each other and the loving friendship that the besties once possessed was now an anger and jealousy fueled rivalry. KO blames Jericho for losing his Universal Championship to Goldberg and he sought out to take the United States Championship as penance. The match was intense (not as intense as I would have hoped) with each SuperStar countering the other’s moves. Final Result: Kevin Owens is your new United States Champion!

Raw Women’s Match– The Raw Womens Match as between Champion Bayley defending against Charlotte, Sasha Banks and Nia Jax in an elimination match for the title. As expected the Super Stars teamed up against Nia Jax to get her eliminated first.  The he trio of Charlotte and Bayley went at it, seeing the Boss pinned. The remaining 2 wrestlers were Charlotte and Bayley which ended with Bayley ending the Queen’s PayPerView Streak! Final Result: Bayley retains!

Raw Tag Team Ladder Match– At the beginning of the Tag Team Match after the teams of Enzo and Cass, Luke Gallows and Karl Anderson and Sheamus and Cesaro stood in the ring, the New Day came out. The new decision was that the Triple Threat was turning into a fatal four way

… Enter THE HARDY BOYS!!! thats right all of the speculation and rumors were true and the Hardy’s are back in the WWE. This match was one of my favorites of the night having chaos and excitement. We were privy to the signature moves and death defying stunts of the Hardy’s. Final Result: New Raw Tag Team Champions The Hardy Boys!

The Miz & Maryse Vs John Cena and Nikki Bella- This match was previewed throughout the last 2 weeks. The Miz and Maryse were battling for supremacy versus Cena and Nikki as WWE’s “IT” couple. From their rendition of Total Bellas to the ring battles these 2 couples hated each other. When the mixed tag battle came to fruition the result that we all knew was coming happened. JohnCena and Nikki Bella solidified themselves as the dominant couple. Side Note: the Miz had soooo many people cheering for him becuase they hated Cena lol.

Final Result: Cena and Nikki Bella wins and get ENGAGED!!!!

Seth Rollins vs Triple H– This of course was the match I was most looking forward to. Our architect Seth Rollins grew a conscious and wanted to take down HHH. He’s been injured, he missed Wrestlemania last year and was close to missing it again. Seth entered the arena with an awesome fire effect added to his entrance music, he was ready to burn down HHH’s kingdom. The match was pretty good, but I did expect it to be a little better. Final result: Seth Rollins… KINGSLAYER! Rollins wins, HHH loses and Stephanie McMahon goes through a table lol.

Bray Wyatt vs Randy Orton– The Eater of world’s and WWE Champon Bray Wyatt takes on the Viper Randy Orton in this epic battle. Randy had aligned himself with Wyatt and even went as far to relinquish his spot as the #1 contender for the title at Wrestlemania. That is before he destroyed Bray’s world! Orton betrays Bray and takes his spot back for the championship match. Final Result: New WWE Champion Randy Orton!

The match still had a few good moments like the double sharpshooter Natayla placed on Carmella and Naomi. The Final Result: New Women’s Champion Naomi takes her title back in her hometown after having to relinquish it due to injury. Welcome back Naomi!

Brock Lesner vs Goldberg– Lesner vs Goldberg was a greatly improved match from the last time. Lesner hit 3 quick German Suplexes off the break. Quick to celebrate he was hit by a few Spears from Goldberg. This barrage of back and forth moves continued until the match concluded. Final Result: New WWE Universal Champion Brock Lesner.

Roman Reigns vs The Undertaker- The final match was the retirement match of the Phenom the Undertaker. The battle of Reigns vs the Dead Man began at the Royal Rumble win Reigns eliminated the Undertaker. Since then they have been calling each other out to see who’s yard the WWE really belongs to. The match was good and I really do ike Roman Reigns so I was annoyed at the constant booing. It’s like most of you are only booing because it’s the “cool” thing to do at the moment. In any case I think the match could have been better especially as the send off for a Legend. #ThankYouTaker

Final Result: Roman Reigns Wins and the Undertake leaves his attire in the middle of the ring, with all of the WWE Universe chanting “Thank You Taker.”

In conclusion I was very proud to have been a part of Wrestlemania 33 and it’s festivities. Tonight I will go to Monday Night Raw (Which should be amazing as well). What were your favorite matches? What do you think will happen tonight on Raw and tomorrow on Smackdown? Let’s talk Wrestlemania! Have a fantastic week!