Happy Monday friends! Thank you for tuning in to another Hidden Treasures segment where I try and shine the spotlight on a show, movie, book, game or any other item in our gaming and geek world that I feel is being “Overlooked.” Have you ever stopped and wondered, hey why isn’t this show or game getting more hype? It could be because of poor marketing, or just because in today’s world we have ENDLESS means of entertainment that some things are bound to fall through the cracks. Let’s jump into this week’s gem the TV Series Reign.

What would you do if the fate of a country was dependent on your choices and actions? As I have mentioned a few times before I have a great affinity and fascination with historical dramas at the moment. My spiral into this world of Queens, Kings, Vikings and Mercenaries actually began right her with Reign (Thank you Netflix!). Reign is the retelling of the journey of Mary, Queen of Scots as she fights for survival, freedom and her country of Scotland. Mary was crowned Queen of

Scotland a few days after her birth due to her father James’ untimely death. Even though her mother Marie De Guise was still alive and kicking, in that time the rightful heir would have been the child born to the king, Mary. Because of Scotland’s ongoing battle with their too close for comfort rivals, England, Mary was sent to live out her developmental days with the nuns.

This is where the story gets interesting. Mary is now of age to marry and assume rule of her country. Due to the despairing events at the convent, Mary is sent to her betrothed in France, Francis. Reign is a loose retelling of actual events as documented between Mary and Francis, however, for dramatic effect I doubt the Queen’s Seer Nostradamus had a hand in most of the events that occurred. 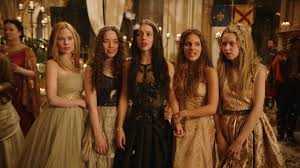 Mary is joined in France by her childhood maidens and friends from Scotland as they begin to get a taste of French Court. With obstacles abound such as assassins, politics and Catherine De Medici, can Mary really hope to solidify her marriage to Francis

and save her deteriorating country of Scotland? Watch and find out! the first 3 seasons of Reign is on Netflix and the new season premiered February 10th, 2017 on The CW. Did I mention that Mary is the cousin to Elizabeth I, that should prove interesting with the England/Scotland debacle :).

All in all I really enjoy this series and writing about it makes me want to watch some more! What are some of your favorite historical drama series? What decisions would you make as Queen/King? Let’s talk hidden treasures!

Have a great week!

I do not own these images